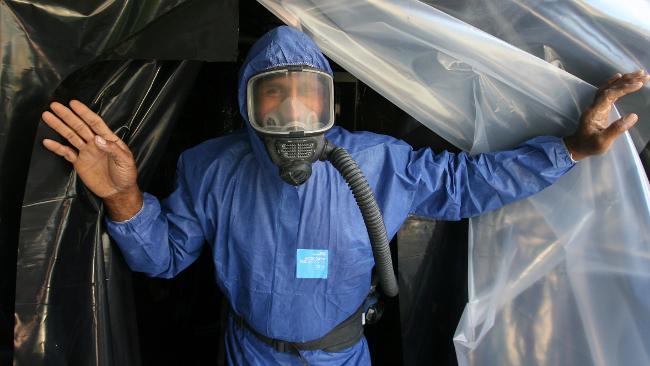 Is an Asbestos Job Right for You?

Asbestos is a naturally-occurring substance that has a variety of uses. It is not used anymore, though, due to its harmful qualities. From about the 1930s to the 1980s, it was used in home and commercial building construction. It was used as a flame retardant, thermal insulation, acoustic ceiling material, and much more. It was valued for its general resistance to corrosion, flames, heat, cold, and damage. In fact, one of the early uses of asbestos was actually just a party trick. Wealthy homeowners would don asbestos gloves and pull burning items out of the fireplace.

In the 1930s, it became much more useful as a home material since it could be mass produced. After a while, it became clear that inhaling the fibres created a number of serious respiratory illnesses, and its use was banned. The science was unclear, though. In the United States, for example, production of asbestos was banned in 1978, but its use was allowed until 1986. Many were not convinced that the substance was harmful enough to warrant immediate banning. That tide has turned, and an entire industry exists devoted to asbestos abatement.

Asbestos abatement comes in two basic varieties: removal and encapsulation. Depending on the application of asbestos, abatement is not always necessary. In the UK, any home built before the 1980s could have asbestos. The only way to know for sure is to hire a specialist to test a sample.

Asbestos job vacancies at Future Select feature openings for those who would like to work in abatement. The jobs tend to pay very well because there is an inherent danger when working with a hazardous material. Technology and safety procedures have advanced enough that most people who work with the harmful materials are perfectly safe. Asbestos is only a danger when the fibres can be dislodged. This is called friable asbestos. So, when the substance is used in flooring, it might be non-friable and thus, nontoxic. The danger of the friable material is that it can be inhaled and cause disease.

It is particularly dangerous when used in walls and ceilings. The roofs are oftentimes called popcorn ceilings or cottage cheese ceilings. These acoustic ceilings allow fibres to fall from the ceiling and into the air. Over time, these fibres can be inhaled. It is also especially dangerous for construction workers or contractors who have to drill into walls or ceilings. Drilling or hammering into walls or ceilings can dislodge fibres and create airborne dust.

If the fibres cannot be made into airborne dust, such as with floor tiles, they pose much less of a danger.

If you are considering a job in asbestos abatement, you should know the procedures you will be using. If you are removing instead of encapsulating the material, you will have to go through a series of steps to ensure the safety of yourself and others.

If users are going to be still in the building during the removal, then you will need to relocate some of them. You will seal off the area where you are going to work with plastic sheeting, duct tape, and an air pressure machine. These machines have high-efficiency particulate arrestance (HEPA) filters. The machines pull fresh air into the contained area but do not allow airborne asbestos to escape and contaminate other parts of the building.

The material will then be physically removed. You will use a specialised vacuum cleaner to clean up because ordinary vacuum cleaners will not suck up all of the errant fibres. If the material is to be removed from a building that is unoccupied, the procedure is slightly different. Sometimes, the entire building has to be sealed off to prevent it from contaminated the outside environment. This is true even of buildings that are going to be demolished. Depending on how and where the asbestos is used, all of it might not need to be removed.

Some companies are beginning to employ newer, more efficient methods for removal. A diamond bladed saw mounted on a track can be used to cut apart entire buildings. The resulting sections are then plastic-wrapped and disposed of. Since the saw is mounted on a track, it can be controlled by workers at a safe distance from the material. While this is not necessarily the work you will be doing if you take an asbestos job, it is exciting that the industry is innovating new techniques to make the work more efficient.

Encapsulation is the process of isolating or secluding the dangerous material without actually removing it. This is preferable when the amount of asbestos is small or relatively harmless. Also, this is useful because it is quicker and less invasive than removal, so typically, the occupants of the building can stay. They will probably have to be temporarily relocated, though. This is often done in residential buildings.

As a contractor, you would likely be responsible for travelling to homes and taking samples of ceilings or walls. You or a third party would test the sample for asbestos. If asbestos were found, you would then have to decide whether to remove or encapsulate the material. If the asbestos in question is in a part of the house where it is likely to be disturbed, then removal would be the right choice. This includes paints, walls that might be disturbed in future remodelling, etc.

However, if the offending material is a secluded part of the house and is in pretty good shape, you can probably encapsulate it. Removal is expensive and somewhat dangerous itself. It will be your job to know the difference.

If you choose to encapsulate it, you will seal and cover the substance. Sealing involves using products designed to bind asbestos fibres together so that they can never become airborne. You could also cover it, which is simply using something like plastic sheeting to isolate the offending material. As a professional, you will be trained in knowing the difference and applying these techniques.

Because so many people do not want to have a known carcinogen in their home or workplace, jobs in asbestos removal are very common. They are well-paying jobs that you can rely on, should you choose one.

Save Money on Energy with an Efficient Hot Water System

How to select beautiful exterior doors in Toronto?