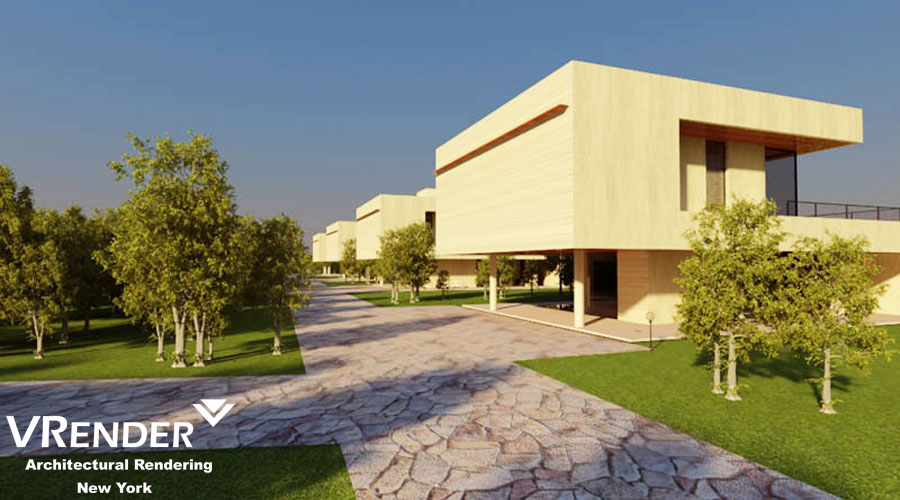 3D visualization is the process of creating three-dimensional models of objects by means of special programs. The result of the development becomes a three-dimensional image of an object or an object with realistic size, texture and color. Any of these parameters may be subsequently changed in a few minutes.

When working on a 3D visualization of the object, the modeling specialist can recreate not only the exact size and photorealistic view of the object, but also its natural light depending on the position in space.

When designing a building project – whatever its purpose is – very often there is a need to demonstrate to the customer how finished object will look like. Previously, drawings and sketches were used for that. All these methods have not lost their relevance today, but now much more powerful tool is at the disposal of architects: the three-dimensional computer visualization. 3D visualization of exterior (outer architectural appearance of the building) can be made based on a detailed technical documentation (floor plans), and on the general concept – sketch or even verbal description. The more detailed the source data is – the more accurate visualization will be performed, but even a rough 3D model will give a better idea of how finished object will look like, better that a simple drawing.

Most often, architectural 3D visualization is performed in 3DsMax program. Depending on the terms of the contract with the design bureau, the customer can receive on hands not only printed materials (or image files), but the source code as well. The degree of detalization of the model and the surrounding landscape depends on the wishes of the customer and features of the building itself: when we talk of the object inscribed in the urban environment (apartment building, office center and so on), as a rule, visualization includes the adjacent sidewalks and car roads; if it is required to create a model of a private house (cottage) – the elements of landscape design are included. 3D model can be developed for a number of lighting options – natural (morning, afternoon, evening – taking into account the direction and intensity of the light) and artificial, including the illumination of the building itself. Animated architectural visualization is even more realistic; for the presentation of a big project, it makes sense to order a 3D visualization of exactly this type. Work on the project begins with the object’s modeling. At this stage, set the geometry, proportions and all the curves of the future model. It is a painstaking process that takes the most part of time and efforts, because work is being done “manually”. As a result, the future object received clear dimensions.

The use of materials in the creation of 3D models

The geometrical dimensions of the object do not give us an idea of how it will look like eventually: bright or monochrome, gloss or matt, transparent or “deaf”. Receiving an idea of the appearance is possible due to the choice of materials with such properties as color, texture, transparency, reflectivity, drawing, and others. After their selection, the model becomes almost palpable – it becomes clear how the object was conceived by its creator, and you can even assess potential commercial success of the idea. This step can be difficult to implement, since in the process of visualizing, the appearance of model is adjusted.

Do You Want The Best Cabinets For Your Kitchens?

Tips on How to Boost your Storage Space

How to Choose a Home Remodeling Contractor

How Long Does Slab Jacking Take?

8 Things To Consider When Renovating Your Home